Student of the Week - Alta

Alta is the student of the week for the great descriptive language she used in her poem about swimming. Her writing is full of powerful verbs and sensory details. Way to go, Alta!

Student of the Week - Justin

Justin is our student of the week for his terrific mastery of long division.  Justin always work hard during math time and this really paying off in our division unit.  Way to go, Justin!

Posted by Ms.Birdsall and Division 9 at 20:24 No comments:

In Social Studies we are currently learning about early European exploration of North America.  After learning about the voyages of Christopher Columbus and John Cabot, students were asked to write a journal as if they were a ship's boy (or girl!) on the boat of one of these famous explorers.  The goal was to write with historical accuracy and "voice" (the personality of the writer).  The students did a wonderful job with this assignment.  Here are some excerpts:

"Today I sailed off.  As I boarded the ship, I smelled the salty air.  The boat was swaying this way and that, and the sound of the waves crashing on the shore echoed in my ear.  I knew I might never see my family again."
-Hareum


"Columbus is crazy.  He just wants to be the first European to sail west."
-Ryan W.

"Last night I couldn't sleep at all.  The sailors were doing their fun activities which made a lot of noise.  I was saying to myself, 'What is their problem? Don't they want to get some sleep?'  They were playing who can climb the tallest mast the fastest. . . . I am sick of this old, bad-smelling boat."
-Ivana

"He gave me hardtack like everyone else was eating.  One of the crew members warned me that there could be BUGS!!!  I dropped the biscuit on the table and all the bugs came out."
- Franchesca

"Finally a friend that's even helpful, John Cabot's cat, so cute!  Plus Peaches (the cat's name) helps me clean . . . the rats!"
-Juliet

"I feel like a dog that just ran five miles!  Being a ship's girl is hard work.  Just scrubbing the decks doesn't seem like hard work, but it's harder than you think."
-Pawan

"John Cabot said there was going to be a big storm ahead.  I was told to set the sails up.  I rushed over to the main mast and put the sails up.  As I was climbing the main mast, I saw the storm coming our way.  It was huge, it was massive, most of all, it was headed our way!"
-Langson

Some students even went above and beyond, making their assignments look like they were from long ago.  Well done, everyone! 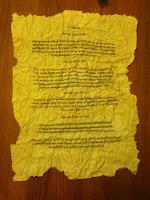 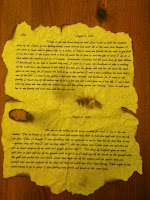 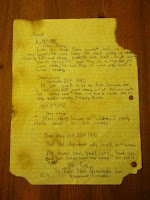 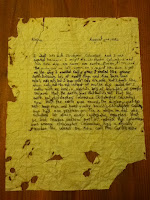 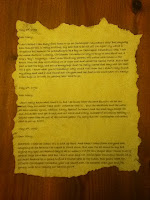 Posted by Ms.Birdsall and Division 9 at 20:09 No comments: